New Frontiers is a themed sci-fi/western themed sim and as such there is an expectation that the in-character avatars are going to be adhering to this. While each race has its own distinct characteristics that can be seen in detail on the race pages there are some rules and guidelines that can be applied across the whole sim and across all players. Second Life is a platform that allows you to get creative and make interesting characters you couldn't do anywhere else, hopefully these guidelines will help you fit your creations into our sim and theme.

If you are having problems you may speak with our admin and mod team on how you can fit into our theme and appearance guidelines. Remember the rule of thumb; Common sense.

Your race and you

Your primary race should be what you are primarily aiming for in terms of physical appearance, with your secondary race providing secondary characteristics. Examples on this page and the below pages are used as guidelines and should not be copied 1/1.

Your character should be closely designed with its race in mind, pulling from the scifi setting and lore background you can create an original, interesting styled character unique to you. Each race has specific guidelines for how they can look, listed below. Please read before diving in and using a character that may break the guidelines.

No characters that appear to be underaged.

Any character that has been designed to clearly seem underage is against both the TOS and the sim's rules. Saying they are extremely old despite their appearance is not an excuse. The Admin and Moderation team will be the ones to decide what is breaking this rule and failing to follow any requested changes will result in swift removal.

Avatars must be of a reasonable size

Characters/races from other media or real life personalities or parodys are disallowed.

As some examples, you may not play as a Twi'lek even if you just say its a gene-modded human. You may also not play as a character named Monald Dump as it clearly a parody of a real person.

Some examples of this would be use of My Little Pony heads or the use of cell-shaded avatar attachments. Anime heads such as the M3 and Venus are allowed for races given they are grounded and not using bright unnatural hairs, ect.

An example of this would be the TWI wolf. Some exemptions to this rule may be made for cybernetic AI characters by the admin and mod team but they must seek approval first before being allowed to play in the sim. No genitals are allowed on these characters and they may not engage in any adult RP. If you wish to be approved speak to an admin/mod, players known to the sim are more likely to be approved. Taur characters are allowed given they are Vatborne, however genitals are not allowed on them.

Feral/Quad avatars all have to be mechanically AI (AI Race in the Hud), but can vary in appearance. They should all, however, have some clearly cybernetic/mechanical aspect to them. 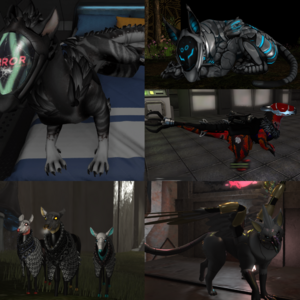 To preserve the New Frontiers Storyline, all currently serving/active duty government, diplomatic and military characters require administrator approval prior to being made. You should approach someone with the "Management Tag" or "Head Admin" Tag about this type of character.

Do not use divisive real life political imagery on your character or any rezzed props.

This is not the place for it. It's almost 800 years in the future so most of it wouldn't make any sense. Don't be the guy insisting on using a swastika armband.

Avoid using extremely old avatar parts that are out of date.

While we are not going to force players to buy new parts and avatars, using old sculpt/prim heavy attachments can have negative effects on game and sim performance and you may fall afoul of the next rule.

Avatar complexity should be kept reasonable, script usage per avatar should not go over 4Mb's.

This is to provide a smooth experience for all players. If you are having trouble with script count, in your viewer press Avatar > Avatar Health > Scripts and you can see what objects you are wearing are the worst offenders. While we allow higher complexity's, going over 350,000 will result in most players viewers de-rendering you. Avatars that have absurdly high complexity's that affect most players viewers will be asked to change. If you are having visual lag or low frame-rates, you can limit the maximum complexity you can render in third-party viewers like Firestorm. If you are still having problems you can contact a member of the team for help or ask in chat.

Your character should not be a vehicle for a fetish.

Sexualized characters are a staple of classic scifi, however if your avatar is clearly the embodiment of a fetish it will not be allowed. If in doubt, reach out to the admins!

You should also not be using attachments and objects that your character does not posses within the sims inventory system. As an example if you do not have a jetpack, your character should not be wearing one. However if you do have one you are not required to represent it as that would require a player making a purchase which is not our goal. The idea is to not purposefully mislead any other players on your loadout.