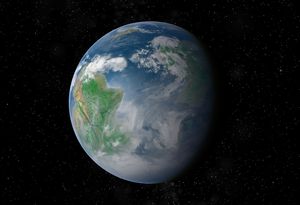 Voltker Prime is the first planet in the Voltker System and the seat of government for the young Federatsiya Feniska. At the time of it's colonization, Voltker Prime was highly valued as a lush garden world. With no native sentient species of its own, the Coalition quickly established a wide-ranging agricultural colony on its surface with the express purpose of taking advantage of the abundance of vegetation. Many of the flora native to Voltker Prime are not only merely edible by the human race, but also quite palatable as well. The introduction of typical crops from Earth went well, and the colony quickly grew as more and more workers and farmers were assigned to assist the burgeoning agricultural industry.

Voltker Prime is the only habitable world in its system, and has an overall mass one fifth larger than Earth's. Due to its slower rotation speed, the standard day on Voltker Prime lasts about thirty-seven Earth hours. This provides more time for a typical work day than most other colonies, and the Federation has been quick to capitalize on this by instituting longer hours and shorter rest periods for the workers there.

Much like Earth, Voltker Prime is located within a specific distance from its system's star, preventing the planet from freezing over or turning into a boiling hellscape. As a planet, it is characterized by its pleasant, temperate environment and long-lasting summer season. Though it experiences temperature drops in both autumn and winter, neither last long enough to have a lasting effect on the hardy vegetation that can be found on its surface. Voltker Prime's famously placid and calm weather patterns have contributed to a thriving tourism industry; it is a favored destination for vacationers to relax in an Earth-like setting. For many, it is as close to the Sol system as they can get given the political turmoil between the Coalition and Federation.

Out of all the worlds that make up the expansive Federation, Voltker Prime is the most heavily colonized. The Federation's government is not ignorant of humanity's history, however; strict environmental policies prevent the kind of pollution that took place on Earth during the Industrial Revolution and Internet Era. As Voltker Prime is nothing less than the breadbasket for hungry colonists everywhere, ensuring that its climate remains as unchanged as possible is an imperative political goal of the Federation government.

A majority of settlements on its surface are agricultural in nature. Farming communities are a common sight to see, focused on harvesting the native fauna or imported Earth crops. Cattle ranches are more heavily regulated but exports of animal fat and furs also contribute to the Federation's wealth. The largest city is the capital, Coronet City, home to the Commander's Palace and other government buildings. As one of the most technologically advanced cities in the Federation, its name is derived from the idea that it is the crown jewel of cooperation, something all other colonies should aspire to be. Unfortunately, it is notoriously difficult to find housing in Coronet City. One must submit to invasive background checks as a security precaution, and even then should one pass, the median cost of a house is far more than most can hope to achieve. This is why great quantities of aspiring workers apply to native farming corporations, as the restrictions placed on seasonal workers are less harsh.

Farmers on Voltker Prime are subject to government oversight. Most agricultural communities are a part of the Federation's state-run forced collective farming. In keeping with the traditions of Federation society, contracts are awarded to communities who can prove they can contribute more to the colonies than others. This pushes farmers to ensure they are growing the highest quality crops they can, or producing the most lush, velveteen furs and succulent meat from their cattle. As a result of this state-run collectivization, however, many take to unsavory means to hurt their competition. Intimidation tactics, arson, and even assault are tools used by communities as they vie for lucrative government contracts.