Ultraball is a full contact flying disc sport played across the galactic community in which players in zero g environments throw discs towards a segmented column target to score points in a spherical arena. The game is often played in two teams with the goal for one team to out-score the other.

Ultraball found its origins in the mid-28th century as space exploration and colonization hit a peak. With so many out in deep space with months or even years to spend, a form of both entertainment and exercise was deeply needed. Bored crewmembers roaming cargo holds for hours eventually came to create the sport of ultraball by turning off artificial gravity and grabbing any circular lid to toss around, using structural columns as goals. During the Secession War this sport grew to new levels of popularity as many troops in need of exercise and teamwork activities would play the game during downtime. After the war the previously small scale professional league gained state support as sides began to use it as a means of displaying strength and competing against one another without weapons involved.

Rules of the Game 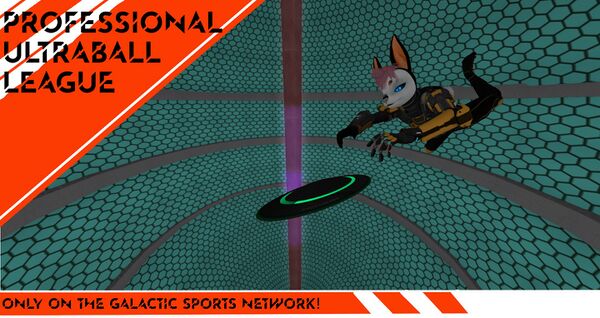 The goal of ultraball is to take control of a discus-shaped ‘ball’ from the opposing team and then throw that ball towards the center column of the arena. Points are scored based on how close to the center the ball hit and awarded to the last team to throw, kick, or redirect the ball before it was able to hit the column.

The sport is full contact and allows players to tackle or shoulder check other players so long as no part of them is touching the wall of the arena. In professional games heavy body armor and maglock gloves are often used to help prevent injury or concussions mid-play.

If both teams agree to it propulsion jets are also often used, however they may not be used outside of a single direction change per jump and cannot be used consistently to enable fully controlled flight. However even if this is allowed a common strategy for redirections and speed boosts will be for one team member to hold onto another, push from a wall, and then throw their teammate in the desired direction for a move termed ‘daisy chaining’.

In the beginning Ultraball was often simply performed in cargo holds and any room inside a ship large enough to freely roam and throw discs. However as people experimented with ideas the ideal arena has slowly shifted to often spherical, and most importantly emptied and cleaned, liquid cargo containers as the area is usually quite large and the walls sturdy enough to be hit with discs without risking damage.

Thus the standard Ultraball arena is a large spherical room, usually 100 meters in diameter, with a structural column running through the center of the space and access hatches on the top and bottom. The column in the center is marked like a target, with rings of paint or lights radiating from the center to mark how many points are earned for striking the goal.

The Professional Ultraball League is organized by a neutral corporation in White Belt space. Teams are normally spread among worlds rather than empires, however the homeworlds of empires are often treated as the representative team of the government and usually carries some government funding. While the Federation and Coalition do not interact on many fields, Ultraball is one of the few places members of the two powers can meet.