The Tavari are a species of avian-like bipeds from the mountainous world of Makkar. Though by their own history they came to discover space travel rather early they were only discovered by the galactic community in the past 100 years. They are now known far and wide for their prowess in battle and in politics.

The Tavari bipedal avians with a humanoid shape, feathered bodies, with leathery taloned hands and feet. They stand between 5-7 feet tall and are generally lighter than most humans. This is not, as most consider, due to hollow bones, as the Tavari do not possess this feature, but instead due to generally lower fat levels. While they are incapable of flight and without surgery do not even possess wings the Tavari are considered quite acrobatic and excellent climbers, capable of using their talons to grip onto a wide variety of surfaces.

In addition to this the Tavari have an excellent set of senses with great ability to use them. Not only is their vision acute but they are capable of standing perfectly still in place for nearly an entire day at a time. They are able to see exceptionally well at night but do not stand for extreme weather very well. Their homeworld of Makkar is a temperate and stable world where climate extremes are not found as often as on other worlds.

It should also be noted that Tavari evolve at a significant rate. Often within a few generations they have adapted fully to the new planet, often with extreme changes to their basic anatomy and appearance. As a result Tavari come in many shapes, sizes, and colors. While the homeworld variant resembles predatory birds such as falcons, hawks, and owls, subspecies have been found reminiscent of parrots, finches, ravens, and any number of other bird species.

Trust for the Tavari is a rare commodity among the galactic community. The species has an almost single minded approach towards success, jumping on the backs of giants while in the end rarely doing work themselves. The labyrinthine political culture of their home planet has allowed them to excel in the galactic community, often able to out maneuver even older races in their own empires. Common practice has thus become to simply presume that if a Tavari is involved in anything politics or military, they are planning something.

Outside of the military however the Tavari are considered excellent company at a party. Despite the uptight and restrictive traditions of their homeworld, dance and music is celebrated. Tavari musicians are considered some of the most talented, their natural ability to control their voices giving them a vocal range that only extensive modification would be able to achieve in other races.

Though this is the reputation that the Tavari hold from their homeworld, many Tavari from other worlds prove different, and not all Tavari can be expected to act the same as those from within the home systems. 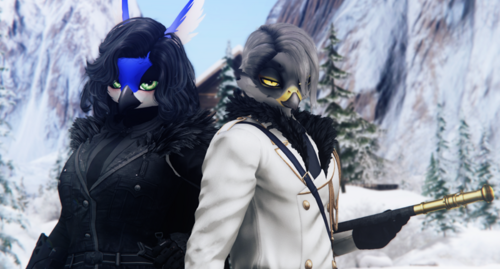 Tavari should be represented as avian in appearance, using an avian-styled head with a beaked face. Some examples of this are the Paws Finch, Happy Paws Birb, and Sugarcult Avian head, though any head resembling a bird is acceptable. Colors and beak types should resemble existing bird types known to Earth. Tavari from Makkar should resemble predatory birds such as hawks and falcons, Tavari from elsewhere may resemble any known bird species.

Wings are not considered natural to Tavari and if included on the avatar represent either a mutation or augmentation added after birth. As per sim rules wings may not be functional for the purposes of flight.