Out of the ashes of the Secession War, Summit Resource Group was founded. Lead by former Solar Legionnaire, it called to its eagle sigil some of the thousands of soldiers and sailors who'd been trapped by the Shattering. As the FTL routes started to be repaired, Summit Resource Group rapidly became the Coalition's go to choice for operations within restricted space, holding over two-hundred and twenty nine separate operations contracts with various ISTO bodies by 2820. Their most recent venture has been to the Miranmir System, tasked with looking after the Coalition & Directorates interests in the system. A twelve strong flotilla was dispatched in 2821 to reinforce the already present diplomatic security force. The reasons for such a substantial deployment are multiple. Artifacts, Federal Guard activity, desire to maintain the status quo. All of these will form part of SRG's mission out on the edge. Needless to say, if history has shown us anything, such a large group of the Coalitions finest corporate soldiers and sailors will cause reverberations that could be felt all the way back in the core.

Founded as a response to the withdrawl of Galactic Coalition forces from the White Belt following The Secession War, Summit Resource Group (SRG) has developed considerable experience in operating in the most austere environments in the galaxy. Seamlessly integrating security, logistics, insurance, intelligence and both physical and digital infrastructure for customized solutions, it works with its clients to overcome complex and unique challenges to defend the Coalition and her allies.

The men and women of SRG operate under one very simple rule. Do nothing to endanger the mission, all else is discretionary. It is this mindset that sets them apart from their more law enforcement minded colleagues. If something threatens the interests or citizens of the Galactic Coalition, or wider interstellar security, they will intervene by any means necessary.

SRG operates out of three main locations in the Miranmir System. The Galactic Coalition Consulate in Dusklight, a major base out in the Frontier and their flotilla of starships in high orbit.

The group has two primary contracts. The first and it's main responsibility, often referred to as "the mission" is with the Galactic Coalition. It tasks them with two delicate missions. One, of securing precursor artifacts within WBA jurisdiction, more specifically, Miranmir, preventing the transfer of these dangerous, yet-to-be understood items into the hands of anyone other then the Coalition. Two, the degradation of the Federation's influence and operations in Miranmir, all whilst operating within the confines of the White Belt Accords.

SRG is also holds a second contract, from the White Belt Administration to secure Dusklights critical infrastructure, starport and orbital space. SRG operators perform rapid response and counter assault duties in response to threats to any of these locations, with law enforcement duties and follow up left to RSS.

Who does SRG look for?

Summit Resource Group looks for individuals from a wide array of backgrounds. Scientists, medics, novices, and seasoned operators alike. Whilst former military experience is a bonus, it is by no means required. SRG provides training and equipment as needed. Courage, passion, initiative, and decisiveness are the ideal qualities the the group looks for as their staff are often be expected to operate alone or in small teams to execute operations in austere environments with little support.

SRG is formed of the command group, four distinct Directorates, and three support units. Directorates are joint formations that handle tasks that require cross cutting support from all SRG elements, SRG personnel will likely find themselves permanently assigned to one Directorate or another. Support Units have very specific mission roles which are typically extra roles, ontop of other responsibilities. 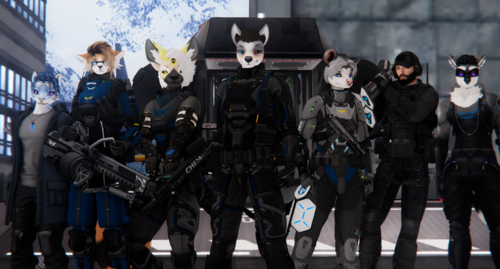 SRG's ranks are split into three major groups. Leadership, the two senior officers responsible for all operations. The Command Group, who oversee specific mission areas. Then the personnel, who enact the orders of the command group and execute SRG's Mission. 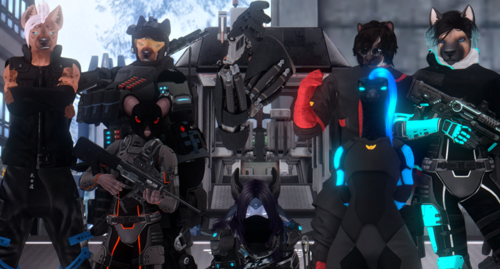 SRG by and large operates to maintain the status quo established by the White Belt Accords, atleast on the surface of things. They do not seek to overturn the governance of the system, but do hold a wilful disregard for their authority, seeing their mission, provided to them by the Galactic Coalition as superior to the WBA's own. That mission often involves projecting Coalition interests, security precursor artfacts or countering Federal (and wider Jingashi Concordant) efforts. This often brings them into direct conflict with groups operating in the same spheres. With regards to corporations, SRG is wholy supportive of most corporate entites, so long as they are Coalition aligned, as evdienced by their close relationship with the Shock Trauma Armed Rescue Service. 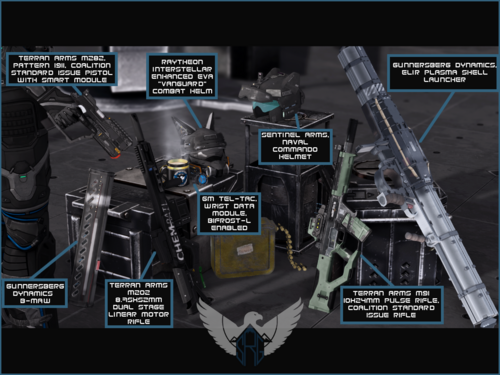 As an orbitally deployed force that has to account for hot drops from dropships, ship to ship boarding actions and ground deployments in a hostile frontier, members of Summit Resource Group (SRG) have access to a variety of armored combat void suits (ACVS). These are sealed, protective suits with self-contained rebreathers that allow the operator to perform combat operations  in hazardous environments, such as the vacuum of space. The beefier, more expensive and heavily armored cousin to the standard “ship suit” that has become ubiquitous throughout the territory of the space borne powers, combat void suits are often equipped with magnetic boots and gloves, tether lines and a whole host of automated sensors designed to inform the wearer about their environs.

More restrictive than standard ship suits, ACVS are substantially better armored and often contain improved system core firmware, enabling them to interface with a wider selection of additional military hardware and software packages. They represent a paradigm shift in armor concepts, using ultra-modern, flexible, fluid Armor plates and hardened smart armorweave fibers to provide primary layers of protection, rather than purely relying on interceptor vests or clamshell armored chest plates. Despite the baseline protection, this doesn’t preclude operators from augmenting their protection with further chest, arm and leg armor, on top of their ACVS. Further rigging can also be worked over the suit to allow personnel to carry more gear. The smart elements of the armorweave skin of these suits can often be reconfigured into various camouflage colors, but operators tend to keep the standard black and Prussian blue.

Whilst standard patterns of ACVS exist, operators have been granted a large amount of leeway in purchasing, developing, fabricating and customizing their own suit. This has led to the ACVS becoming as much a standard as a product.

Introduced to address concerns of some operators regarding unnecessary wear and tear on ACVS outside of environmental hazard areas. This more comfortable clothing option, the Frontier Duty Uniform is based on the Coalitions Interstellar Duty Uniform. Fabricated from a robust yet light nanoweave fabric, the base uniform, either in black or multicam provides a very basic level of protection, thermal regulation and signature reduction. This is often augmented with standard issue “vanguard” armor systems, covering the torso, shoulders and shins.

Whilst the Frontier Duty Uniform isn’t rated for void operations, when coupled with appropriate boots, gloves and enclosed helmet, it can provide a time limited element of sealed protection from vacuum and other hazardous elements.

SRG has no standardized weapon policy. Affording its operators an element of tactical flexibility to deploy whatever weapon system they deem tactically and operationally prudent. However it does maintain a sizeable cache of "standardized" weapons, most drawn from the Coalition armories made by Terran Arms Inc. As a sidearm, it uses the M282 Pulse Pistol, the Coalition's standard issue sidearm. Modeled after the venerable 1911 but packed with 29th century technology and chambered in 10mm caseless. For a rifle, the M91 Pulse Rifle, chambered in 10x244mm caseless, this rifle has served both the Navy and Marines as their primary battlefield weapon for the last ten years. Highly modular, the M91 can be configured as a PDW, Carbine, Assault Rifle, Marksman Rifle or even configured to fire rocket assisted ammo. The M91 is also distinctive for the "slapping" motion possible when charging the weapon. Although most manuals suggest using the bolt release. Finally, in the small arms category, the Coalition Armies standard battle rifle, the M202 Dual Stage Linear Motor Rifle or DSLMR. Desiring something with more stopping power then the M91, the M202 fires 8.75x52mm sabot's that are first chemically launched, then accelerated by electromagnetic coils delivering exceptionally high muzzle velocities capable of punching through most, if not all modern battlefield armor.

In 2821 SRG dispatched a full flotilla to support their operations in Miranmir. The Naval force consists almost entirely out of modified Bolar's freighters, with support from two Anomura gunboats and a single missile frigate. The force was formally registered with the WBA authorities in the system.