Founded as the rescue service for Kyoshi Corporation after noticing a lack of adequate healthcare and security on its mining colonies, STARS, short for Shock Trauma Armed Rescue Service, is a multifaceted tactical and technical rescue company providing advanced medical care no matter how hostile the environment. Originally founded exclusively for corporate operations, the company has since expanded to operate in civilian centers where law enforcement and medical care are either non-existent, overstretched, or underfunded/understaffed.

The crux of the service offered is emergency medical evacuation, but do not let this fool the observer into seeing the company as altruistic. The company operates on a ruthless basis of payment for services. Those seeking charity care should not utilize STARS. The program was designed for, and remains largely utilized by, society’s elite and wealthy. For those who can afford it, though, there is no better service when one’s life is on the line. STARS teams are known to head to incidents in numbers, and while not actively seeking out fights - they have no desire to be ‘company police’ - they aren’t afraid to engage any threats to their patients, either. Particularly out here in the belt, where things like “duty to act” laws aren’t on the books, STARS paramedics are known to prioritize the client over all other injured in an emergency.

STARS blurs the line between “do no harm” and “do know harm”, so much so that the latter is its official motto of the company. STARS paramedics are known to arrive in force to any incident utilizing the company's one of a kind medical dropships. The goal is patient extrication, however, not suspect apprehension.

STARS is known to always give combatants the chance to exit the fight before engaging. They are not known to fire first, as the best case outcome for STARS financially is the assailants simply leave the patient upon seeing STARS arrive in force. Power projection is the name of the game.

While officially neutral to this regard, rumors persist that STARS operatives are infrequently used by other corporations as hired muscle, including in “union busting” efforts. STARS management will obviously vehemently deny such claims, but the rumors persist in many of Onia’s more left leaning organizations that STARS is little more than modern day medical Pinkerton’s.

While officially subcontracted to the medical contract secured by Stag Industries, STARS is given unique and specific leeway in its business dealings as part of Kyoshi. It is not expected to directly engage in Stag’s corporate conflicts, and is free to make its own business deals that at least appear to keep the organizations neutrality, including with members of Triton and Osiris. Tentatively, the groups seem to at least tolerate each other; STARS is seemingly a necessary evil at the moment, as no other organized group exists to provide prehospital care, but if this peace will remain is yet to be seen, particularly as STARS is pulled into Stag’s brand and brand reputation. STARS remains on friendly terms with more “corporate leaning” factions; including having a written agreement with Summit Resource Group and working relatively closely with Reeves Star Security, even if the group's interests sometimes conflict. 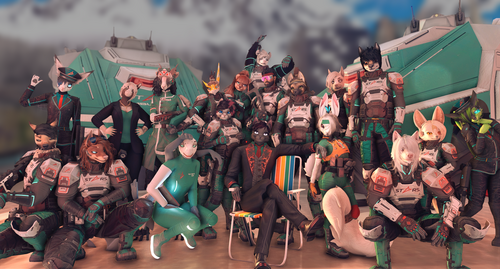 NOTE: There are many in character job titles, but all generally share the same OOC payscale.

Director (1IC): The overseer of a STARS Division, in this case, the Onia operation. He reports to both STARS Corporate, and thus Kyoshi, and to some degree the contractor, in this case Stag Industries

Chief Medical Officer (CMO) (2IC): This role is vital for ensuring quality medical care and quality control are maintained. They oversee all Physicians and Paramedics in the operation and work closely with Clarke's hospital.

Chief Engineer (3IC):  The Chief Engineer is vital for keeping all technical aspects of the operation running, from gear and equipment, to the essential dropships. They oversee all Responders and Technicians/Engineers in a division and act as Quartermaster.

Office Manager (4IC): The Office Manager oversees all the company’s administrative functions, including managing all sales reps, collections specialists, and more. They are vital to seeing the division function day to day and splitting the workload.

Crew Chief: Crew Chiefs are typically promoted from Paramedics and Responders, who share their original role, but also can act as Team Leader on calls and incidents. They otherwise have no administrative duties.

Sapient Resources: Sapient Resources handles day to day office conflicts that may arise within the corporation. SR has the authority to mediate disputes between lower employees and enact minor remedial action.

Physician: Doctors are quintessential to any STARS operation. They are most commonly seen in the office’s clinic treating patients, but absolutely can venture into the field to assist Paramedics and Responders when required.

Paramedic: The bread and butter of the operation. Paramedics are highly trained professionals who specialize in both eliminating threats, and treating patients utilizing advanced lifesaving skills.

Technician: Technicians focus on the technical rescue aspect of STARS. Cutting open ships. Removing people from wrecked cars. Assisting the Chief Engineer with engineering tasks. All are within their purview. Don’t let that confuse anyone though; they are still more than capable of defending themselves and their team.

Responder: Pilots. Hired muscle. All usually fall under Responder. This is a title the company is starting to rely less on, though; ideally most field staff are at least Technicians or Paramedics.

Billing Specialist: Polite calls. Gentle emails. The occasional busted kneecap. They do what it takes to ensure STARS gets paid what it’s due from transported patients.

Scientist: I'm With the Science Team! Scientists provide valuable research data for Kyoshi and STARS, though they are rarely seen outside of the lab unless a job requires it.

Sales Rep: Sweet talking scoundrels who work towards securing much needed sales revenue. Without these goons, there’d be no operation.

Other Employees: Can be janitors, secretaries, Information Technology, other ‘non glorious’ jobs that keep the place running!

Indebted: People who owe STARS or Kyoshi money and elected to work it off instead of paying. Typically they wind up in janitorial or secretarial work, but it depends on individual skillset. This has been used as a method into the faction proper; with some indebted people holding response or medical roles. 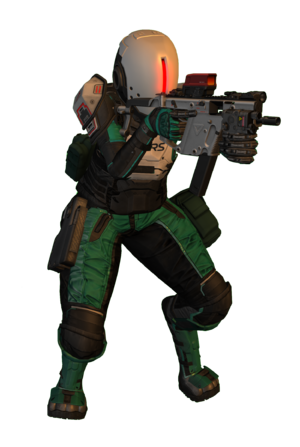 A STARS Operator in MK.3 SORE

The Kyoshi Mk.3 SORE is the bread and butter of what keeps STARS going, providing response teams with the essential protection and functionality necessary to conduct their operations. While earlier versions of the equipment were entirely built from the ground up by Kyoshi, it was soon realized that this development model severely limited their ability to keep equipment on-par with the frequent innovations brought by commercial products. With the Mk.3, Kyoshi instead chose to utilize commercially-available equipment as the foundation, and focused their development on providing advanced customization to exceed their previous specifications in a way that would give STARS a significant advantage over their adversaries.

The Mk.3 SORE comprises three core components: The helmet, suit, and vest. As a whole, the equipment can survive in most environments with full IEVA capabilities, while still being maneuverable enough to allow field staff to perform their duties without hindrance to their mobility. The most notable part of the Mk.3 SORE is the white and black helmet that serves as the primary control center for the entirety of the suit. Each helmet is fitted with a vast array of predictive tactical, environmental, and medical sensors: each working hand-in-hand via a neural link to ensure that field staff have the most accurate information available to them before they realize it was needed. Unlike the helmet, the suit and vest are closer to their commercial equivalences. The most notable changes are the enhanced protections against foreign substance ingress, additional protections against radiation and vacuums, and full life support integration with thermal regulation. On top of all this, a proprietary flexible armor developed by Kyoshi has been integrated into all parts of the suit, providing users with additional protections from impacts, punctures, and harmful energy sources.

Unfortunately, the power draw from these systems is quite significant compared to their commercial designs, leaving users with only 4-5 hours of usage between full charges. In addition, emergency systems integrated into the suit have largely been limited to reduce weight and power drain. To mitigate these issues, expansion modules may be added to the SORE as required, but these modules significantly increase the weight of the system and limit the mobility of the user. Because of this, these modules are often strictly restricted to orbital use, high-risk research operations, or industrial rescue. 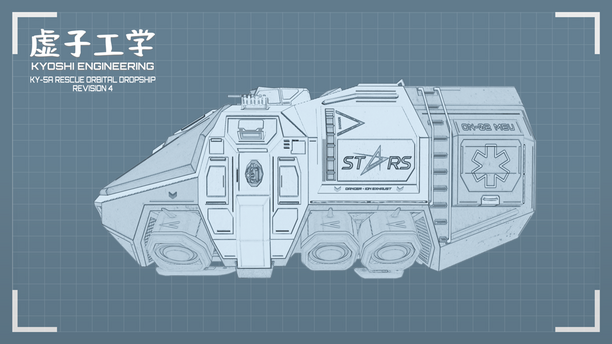 Purpose-built for STARS operations, the Ky-5A Rescue Orbital Dropship was designed from the ground up to provide STARS with a highly mobile, easily defendable vessel for their rescue operations. As the name suggests, the Ky-5 is fully capable of sustaining short-term orbital flight and re-entry into an atmosphere, all without having to sacrifice any rescue abilities. Built with Kyoshi’s “Expansive Rescue Initiative” in mind, the ship is easily deployable from any STARS hospital ship to a planet’s surface for long-duration operations. Due to their adaptability, some regions have recently integrated Ky-5’s into their planetary STARS fleet without the need for frequent returns to orbit for maintenance or refueling.

Due to the hazardous situations the ship is often placed in, the ship is moderately armored and armed to counter any of the typical threats it may face. These measures are primarily focused towards the protection of the ship and crew against medium to light threats, as the Ky-5 would not likely be able to survive an engagement with a dedicated combat vessel. To mitigate these threats, the Ky-5 entirely relies on its suite of automated countermeasures - using a combination of passive and active jamming, and the deployment of chaff/flare capsules in the event that it is targeted. During planetary operations, such as on Onia, the ship’s weapon system is often automatically disabled to meet regulatory requirements. It is possible for the crews to override these restrictions as required, but only in times of dire need.

One key difference between previous Kyoshi dropships is the integration of the Kyoshi Automated Assistive Control suite (KAAC), a predictive flight automation system which relies on a neural link between the pilot and the ship to allow it to perform at its peak performance. This link relies on monitoring what the user intends to do without having to depend on control inputs from the pilot, which is one of the key factors that has allowed STARS to arrive on scene within the advertised 3 minute window. Physical flight controls are also available to the pilot, but are only used for fine adjustments during normal operations.