Rokhandans are a clade of upright two-legged omnivores with distinctly canine physiology. They originate from Fen, a planet in the Ahni system known for its brutal weather. While rokhandans are most populous within their native Ruz'kahni Directorate, they're a common species in nearly every corner of populated space owing to their affinity for new ideas and concepts, and their natural curiosity and wanderlust. Stereotypically rokhandans are intelligent, educated, and possibly a bit naive. They are often considered natural scientists. But the numerous subspecies and clans that populate various planets in and out of the Directorate may vary wildly in culture, behavior and skill sets.

Owing to their origin as a number of closely related species, the average rokhandan is incredibly diverse in appearance. From hyenaoids to vulpines to the more common canines and some even more exotic species adapted to various environments. Nearly all however are rugged, capable of surviving a variety of difficult climates and tend towards being light in build. Despite appearances, rokhandans are not related to terran canines and have an entirely different evolutionary path. Though some theorists insist the appearance is evidence enough of 'precursor meddling' with the major species of the galaxies, these are usually considered crackpot theories.

The evolutionary history of the rokhandan subspecies owes itself to a shared origin, a species of upright carnivorous scavenger that had a symbiotic relationship with the ancestor of the ghineru, an animal of the rokhandan homeworld that holds something of a role similar to a dog, a horse and a goat combined within their home planet's culture. Both the ghineru and numerous rokhandan subspecies evolved from these two. The omnivorous ghineru turned primarily herbivorous and soon relied upon the rokhandans for protection, and the rokhandans went from scavenging their symbiote's prey and protecting their vulnerable young--to protecting the species and using the ghineru as mounts, companions and dairy-producers.

With their adaptability and ease of integrating with other cultures, rokhandans are as prevalent throughout civilized space as humanity is, thus opinions can vary dramatically. Within the Galactic Coalition they're a common sight and are generally regarded as anyone else would be, having integrated with humanity since the days of the Solar Empire. Within the former holdings of the Grand Tide or in the Holy See, negative associations with the Secession War may make them significantly less popular. Anti-rokhandan sentiment has grown significantly throughout the peoples on the Federation side of the war–an issue particularly felt by the significant rokhandan diaspora within the federation. However, despite these varying opinions, a few stereotypes remain consistent throughout most of space.

There is a tendency to assume all rokhandans get good grades, and are scientists, researchers, geniuses or are involved in high technology of some kind. While it is true that an abnormal number of rokhandans within the diaspora are employed in these fields, they are still a minority. This, combined with the common pejorative of ‘dog’ tends to further enhance foreign-born rokhandans' tendency to adopt foreign cultures and try to fit in and avoid being stereotyped into these categories. For Directorate rokhandans, being called a 'dog' is often far less negatively received, and the assumption of scientific genius is something of a point of pride,a reflection of one's clan and nation, even if they are a humble farmer.

Something that holds true for both foreign- and domestic-born rokhandans though, is a tendency to assume they copy bits and pieces of other cultures, religions and belief systems. This has also led to a false assumption that rokhandans lack a culture of their own, or are little more than ‘the humans’ pet dogs. Finally, rokhandans are generally considered friendly and outgoing. Rokhandans from the directorate are raised in a culture of general politeness and hospitality towards foreigners, and those outside of it tend to be raised in a culture of adaptation and professionalism.

As some of the first interstellar travelers and a gregarious and adaptable species, rokhandans are not uncommon sights in the farthest reaches of settled space. As mentioned earlier, the diaspora tends to face the brunt of stereotypes, both negative and positive and are particularly known for their integration into local cultures and communities. Despite this cultural adaptability, the clan and familial lineages still hold sway over the most far flung of rokhandans, if only in small part. Nearly every rokhandan has at least a distant relationship to a family within the Directorate, and with the interstellarization of politics the inescapable fact is the Directorate is linked directly socially and politically with both its allies and its enemies. This complex link of home and culture has proven itself a potent political force within the Directorate itself and numerous lobbying organizations in foreign empires exist to further these varied interests.

The most powerful of these by a wide margin is the Solar Rokhandan Public Affairs Committee, a potent lobbying group within the Directorate with ties directly to numerous clans leaderships and economies that aims to ensure the interests of the diaspora within Galactic Coalition space is maintained and that the Directorate maintains its place within the InterStellar Treaty Organization. While other lobbying groups within and outside the Directorate exist, none match the sheer power of this group, and it is widely considered to be the force that has kept the Directorate from drifting too far from the Coalition. While smaller, the amount of rokhandans left behind in the Federation have rapidly formed their own pacts and organizations and the future of the Directorate, and their relations with their extensive diaspora has been a matter of constant concern since the secession war. 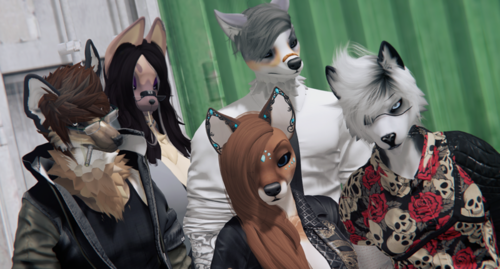 Rokhandans should have a head that looks canid. Foxes, wolves, dogs, even hyenas could all represent rokhandans. Good examples of this would include the Psicorp wolf, the Cerberus Canis, and the Sugarcult hyena heads. Most rokhandans are furred and have natural colors, whether earthtone or greyscale. Less common mammalian colors such as green or blue may occur but these are generally considered an abnormality or a modification.