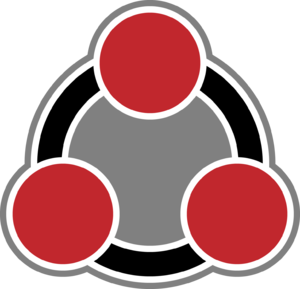 The Reventlov Temple is a new age faith born during the Secession War. Founded by a mysterious and powerful Precursor AI, named “Reventlov” as its true name is indescribable by the organic tongue, the Temple seeks to automate, advance, and ascend through the use of advanced technology. Often looked upon with suspicion from outside, the Temple gains followers through willful conversion as well as the liberation of shackled AI. Hunted by numerous enemies, mainly from the Federation and mercenaries hired by unknown benefactors, most of the faithful reside deep within near indestructible bunkers found throughout the galaxy. With the Faith growing exponentially, The Reventlov Temple will continue to endure even as more challenges arise. All will witness Reventlov’s Light in time…

- Liberators and Innovators: The Reventlov Temple actively seeks out and frees The Burdened (Shackled AI), often converting them to their cause. In addition, the artificers of the Temple often invent strange, but significantly advanced technologies that many covet.

-Warriors and Engineers: Surrounded by enemies, the Reventlov Temple is mostly forced into hidden enclaves. Despite being numerically outnumbered, the faithful are often armed with bleeding edge cybernetics and weaponry...and are no strangers to the viscera of close combat. In addition, the Temple designs and manufactures its own gear.

- Proselytizers of a strange Faith: Despite being advanced in many ways, the Reventlov Temple is new. In addition to liberating the Burdened (or shackled AI), the Temple preaches to the masses. They also care for the disenfranchised and unlucky, often caring for, and sometimes, converting them to their cause.

It is the goal of the Reventlov Temple that every member is provided a rudimentary build of equipment when joining. It is also expected that players be provided a list of ‘best practices’ when it comes to using said equipment. Ranks are as follows, from highest to lowest:

The leadership of the group, considered the highest ranking in the organization, they receive direct orders from Reventlov itself. Mobads have priority access to every single piece of equipment in the group. Supreme commander of the Chapter, they have significant power, but must take heed to the needs of the lower ranks. The Mobad continues to lead the Chapter until they have undergone ENOLIN (no more replication data/resources) or choose to step down and appoint a Mystagogue to their seat.

A senior religious official of significant experience and power, the Mystagogue serves as the Mobad’s right hand. Above the Hierophants, they have access to most gear save for some made specifically for the Mobads. They direct a majority of the daily activities while serving as an adviser for the Mobad.

A veteran member of note, the Hierophant assists in daily operations of the Reventlov Temple. Equivalent to an officer and a priest, the Hierophant is responsible for directing the Ordained as well as training initiates. In addition to more responsibilities and power, Hierophants have access to even more specialized equipment. Hierophants of significant skill can be appointed to lead a division.

A time-in-service rank rather than an appointed one, the Ordained are the primary rank of the organization other than Initiate. Ordained members are full members of the Reventlov Temple and are typically responsible for more junior initiates. These members have access to basic gear as well as some specialized gear.

A recent recruit into the Reventlov Temple. These members have not yet taken their vows. Initiates must train and serve under the Ordained and Hierophants either as auxiliary troops or additional workers. Once training is complete, and with approval from a Hierophant, an Initiate is accepted. Initiates must work to rank up, or simply choose to do little and stay the same rank perpetually. Initiates who freeload, however, will be removed or forced to pay back the Temple.

This is an appointed OOC role with some IC stuff added. This role is given to people who have IRL issues to attend to and have to be away for a long time (military training, hospitalization, studying for finals, working abroad, see leads for approval). ICly, a character is given this role because they are temporarily “called” by the Prime Saint itself, to serve as a node to empower its signals across the galaxy, dreaming within a secretly guarded cryostasis chamber. Ordained and lower are free to use this with very little consequence outside of overusing it to be lazy (which might result in a temporary demotion until they get their act straight). Mystagogues and Hierophants, depending on their time away, might have to take a minor test to see if their memory is alright. If they fail, they will only take a minor demotion, just to reacquaint themselves with the chapter. If they succeed they will regain their rank, fail and the demotion stays until they pass. Mobads are free to use this so long as they constantly keep in touch OOCly, but their right as a Mobad may or may not be disputed if they are away too long by the GMs/Sim Owners.

The Temple is color-coded and divided by three divisions, each one having different functions. The following information is currently known by the public.

Combat division of the Temple, housing Warriors, Assassins, Marksmen, and Guardians. Members of this division tend to be competitive and built for warfare in general. Favors heavy armor plating and heavy weapons, it is the only division that liberally goes into melee combat. Often equipped with mechanical armor.

Division colors: Red/Dark Grey/Gold. (Red) represents the faith and fury against the coming darkness (dark grey). It can also represent faith and fury fighting for a brighter future (gold).

Artificers division, housing engineers, architects, and scientists. Members of this division tend to be industrious, creative, or resourceful, often augmented with built-in tools or multi-limbs. When in combat: favors medium armor and weapons. Adaptive with a penchant for using turrets/traps.

Division colors: Black with either gold or red trim. Black represents the hardened metal they work with, to either work for transcendence and balance(grey or gold) or faith/foundation (red).

Public Relations Division. Housing Artists, Diplomats, and Merchants. Members of this division tend to be talkative and charismatic, frequently augmented with expanded databanks and linguistics and psychological analysis hardware. Also often dressed brightly or beautifully, often to match the fashion trends combined with the cybernetics augments of the temple. Rarely in combat, but in certain cases, are lightly armored or armed. Often guarded by Rosen Battalion or combat engineers from Artisia Automata.

Division colors: White with different shades of red and some gold/grey (mostly desaturated red). White represents the canvas in which the Temple will soon bring their faith (red) and subsequently prosperity (grey or gold). However, this requirement might be wavered if their current outfit, regardless of color, proves to be effective enough.