Onia is located in the Miranmir system, orbiting the gas giant Dione, near the edge of White Belt space. As far as border worlds go, it is one of the largest in terms of population. However, its remote location makes traveling difficult. Known as one of the very few garden worlds in the demilitarized zone, the Coalition aggressively colonized the planet, deploying their terraforming technology to make the growing of Earth crops possible. In doing so, however, the natural ecosystem was irrevocably damaged. Alien forests were gradually eclipsed by trees planted by colonists, and now precious little remains of Onia's native flora and fauna.

Its first major colonization effort was a result of the Galactic Coalition's ambitious expansion policies. Survey teams noted a high quantity of not only heavy metals in Onia's crust, but an abundant presence of W-1, the most valuable resource a planet could realistically have. Colonists seeking to profit off of these rare resources quickly flocked to Onia, leading to the founding of Dusklight Colony on May 11th, 2749. At that time, Onia was a major investment for the Galactic Coalition but when the Succession War began they were forced to abandon their plans for expansion to focus on the war effort.

As the Coalition fractured, Onia was left perilously close to Federation space. Its distance from the core worlds inhibited the Coalition's ability to maneuver fleets or help defend the local garrison. Since Onia was home to vast store of W-1, the Federation's interest in the planet was high. Numerous bombing raids were carried out on the colonists, leaving homesteads and infrastructure damaged. When the Federation deployed their super-weapon, however, its catastrophic misfiring made traversing the Onia hyperlane near impossible, leaving the only way to reach the planet a roundabout route that more than tripled travel time. It is because of these wartime transgressions that a good majority of the local populace harbors anti-Federation sentiments.

Ultimately, the Coalition and the Federation were forced to negotiate a fragile peace, leaving Onia in the demilitarized zone. Now deprived of the funding that the Coalition provided them, repairing the damage from the war seemed an insurmountable task. Luckily, the White Belt Administration saw the value in the colony. When they became the defacto government for the White Belt, a few lucrative grants were given to Dusklight to repair and resume mining operations. The subspace ruptures caused by the Federation's failed super-weapon continuously inhibited travel to the planet, though, and while Onia was useful for a short while once it had managed to rebuild, another catastrophe came in the form of a destructive earthquake.

This catastrophe proved providence for the once hopeless colony however, as the shifting land unveiled a once hidden trove of precursor relics and previously untapped W-1 stores. In the two years following the earthquake many agents of greater interstellar powers would take interest in the planet. Plans were undertaken to expand the colony once more, and following a fortuitous flood they would create room for a doubling of the previous population.

Dusklight now stands at a crossroads of fate as new souls flood into this once desolate boomtown. New attention is brought to the world every day, and each time bringing new flavors of madness to the busy streets alongside it. Whether it will collapse into destruction or become a hub of prosperity it was always intended to be remains to be seen. 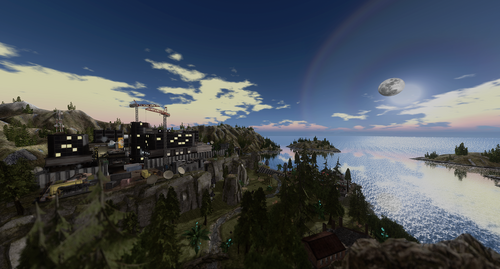 A vast majority of Onia's surface remains undeveloped. The largest and most populous colony is Dusklight Colony, located in one of Onia's temperate forest regions. It is the oldest colony on the planet's surface, founded by the initial survey team and colonists that discovered the planet. While small, its population density is quite high. Beyond the towering defense walls built around the city, however, are a number of smaller settlements and homesteads where farmers toil away and dig teams work to try and make some small profit. These homesteads and settlements are heavily dependent on Dusklight for power, utilities such as water and telephone, and the trade that flows through its busy starport.

Though it is one of the planets with the largest population in the outer rim, it is not populous enough to justify having a capital or local government. Instead, Onia is indirectly governed by the Outer Rim Authority, a part of the White Belt Administration that oversees all of its rimworld colonies. The entire outer rim is a single voting bloc as far as elections go, and as such its citizens can vote for a single pair of representatives to represent them all in Administration affairs. Obviously, these two individuals typically lack the voting power on their own to change much of anything for the outer rim, save for candidates that may sit on the Outer Rim Authority. Even then, these chosen candidates must be approved by the Administration to receive their post.

While Onia does have a system of written laws the enforcement of these laws is generally left up to the local community. Without a central authority to keep things in line most on the planet rely on personal forms of protection, vigilante justice, or the aid of various factions to help stop those who would do them harm. This near lawlessness has attracted the attention of many corporations and individuals hoping to take advantage of the situation. For this the only line of defense remains the System Marshals, a limited group of lawmen who can only ever be called upon in the most dire of circumstances.

As a colony of the White Belt Administration, Onia technically is able to freely trade with any other galactic entity or accept immigrants from other worlds. Usually, though, the Outer Rim Authority handles such transactions and Onia is forced to accept their migrants or trade deals, sometimes having to work in very small time frames to meet demands. The Administration regularly convinces aliens or citizens to travel to these outer rim planets, promising wealth and prosperity. These individuals sign contracts that necessitate them living on and working on their destination planet for a number of years, while providing them a Universal Basic Income. While attractive at first, colonists usually find that life in the outer rim is not as glamorous as they were lead to believe and end up stuck on these worlds until their contract runs out...

Onia is an Earth-like planet, and has a varied climate as a result. One of the defining features of life on Onia is the long period between sunset and nightfall, thanks to the binary star system that it is located in. Daylight hours are shorter than Earth's, and as a result a vast majority of Onia's surface consists of temperate forests. Human terraforming has impacted the climate as well, though not by much. Approximately fifty percent of Onia's surface consists of saltwater oceans, with the remaining landmasses heavily forested. Nearer to the equator, hotter jungles can be found but the slow replacement of alien fauna with invasive human species has drastically impacted the local ecosystem.

Like Earth, Onia experiences the four separate seasons of spring, summer, autumn and winter. Owing to the abundance of water, rain is common on Onia, making it a great farming planet. Its oxygen rich environment encourages insect growth, and these alien insectoids are one of the last remaining vestiges of native fauna. They are a nuisance to local operations, and some are innately hostile to colonists.

The most prominent feature of Onia remains its seemingly endless Ironwood forests, powerful and tall, these evergreens cover a vast majority of the world. Mixed alongside that familiar flora are decidedly more dangerous and alien forms of plantlife.Bioluminescence, predation, and mimicry are to be found in vast quantities.

Before terraforming attempts were made on Onia life did exist on the planet, however much of it was alien and incredibly hostile to the surveyors who originally traveled the surface. After colonization mammals, fish, and other livestock were imported to the planet in order to make it more habitable. Often these creatures are genetically modified or have mutated post-arrival to the planet’s surface.