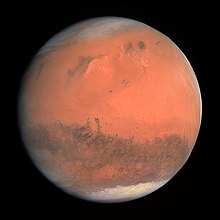 Mars is the oldest and largest planet colonized by humans, located in Galactic Coalition space.

Mars was the very first planet subject to human colonization and terraforming efforts. Settled before the Galactic Coalition was formed, Earth corporations invested into the development of Mars quite heavily, seeing it both as a lucrative business venture and as a way to remove themselves from government oversight and restriction. Mars quickly drew attention and interest with promises of secured jobs and space being advertised to Earth's masses as a new life that had only been science fiction a generation before. Colonies were established by corporations with little oversight by Earth's governments, creating their own strange fiefdoms on the red planet. Colonies were built before terraforming technology was in a usable state, leading to the most common style of colony being subterranean and cave based before surface structures were viable alternatives.

Life on Mars for those who ended up making the trip, however, was not what had been sold back on Earth. Cramped conditions made life uncomfortable, and few rights were given to workers. The expense of early space travel ensured those who made the trip were stuck, forced to carry on just to survive. Many corporations ran their own colonies and while conditions varied, they rarely were anything other than the bare minimum required to drive a profit. Questionable radiation protection with little oversight, poor living conditions, substandard healthcare and a general lack of attentiveness from their employers on Earth would lead to lower life expectancy and health problems throughout the life of much of its population. Mars' economy relied mainly on its mining operations, as certain resources that had grown more scare on Earth such as metals were found in abundance in Mars' crust.

Change would first come to Mars when the Galactic Coalition was formed, which soon sought to standardize rules and rights throughout the existing Human colonies. While Mars saw an improvement in its overall conditions it was still under the thumb of many corporations with a focus on profits. Progress would see a halt during the Succession War as the Galactic Coalition would put a focus on production in one of the most industrialized planets in its borders. With the end of the war, planets like Mars within the Galactic Coalition borders now find themselves shouldering a heavier burden and a return to progress has been slow.

A vast majority of Mars' population can trace their lineages back to the very first colonists that settled the red planet. It's proximity to Earth and ease of access has helped contribute to a sizeable demographic of humans, however with the end of the Succession War other alien species have begun to emigrate to Sol space. The cheap living conditions on Mars are attractive to the poor, and an extensive network of advertising throughout the galaxy has helped a thriving alien community grow, making the red planet home to nearly every race that can make the long trip from their native space to Sol.

Those living there are typically blue collar working class citizens that keep the wheels of Mars' heavy industry turning. Hardened from both the work and the harsh conditions of their red home they live a tough and sometimes dangerous life, with positive changes to their situation few and far between. This restlessness, coupled with the postwar drop in price of space travel has caused a new wave of emigration from Mars as a new generation of Martians look for a better life elsewhere in the galaxy.