Homo-Sapiens, otherwise known as humans, are a bipedal mammalian species that originates from Earth, a diverse garden world located within the Solar system. Humans as a species have a long and troubled history, having weathered plenty of crises from economical collapses to scarcely avoiding nuclear war to outright resource depletion. Even in the current galactic environment, humanity has not fully outgrown its basest roots, as a conflict between the human government and disillusioned rebels resulted in a catastrophic event that affected the entire galaxy at large.

Humans are a species with an average height between five and seven feet. Body types can range from skinny to broad to obese depending on their lifestyle. They are bipedal in nature, and share a common genetic ancestor with monkeys and other primates. Unlike their distant simian relatives, humans are not fur-covered, and possess a great deal of intelligence. Human skin tones manifest in a wide variety of earthen colors, from a pale pasty white to a deep, rich brown. This is entirely dependent on heritage and ancestry nowadays and less so what region of Earth one is from. Typical eye colors are blue, green, auburn, hazel, and rarely gray.

One of the main traits of the human race is their ease in adapting to foreign environments. Part of what enabled the Coalition to expand so aggressively in their attempts to colonize the galaxy was the sheer adaptability of the typical human. While other races, such as the Lumii, might have issues integrating into environments different from their home planets, humans have no such issue. Some aliens jokingly refer to humans as a sort of virus-level species, able to swarm into and overtake planets with little fanfare.

To the galaxy at large, humans are often viewed as a stubborn, aggressive, and violent species. They have a reputation as xenophobic expansionists who trust only their own species, despite the Coalition's somewhat open acceptance of alien immigrants. Outside of their own holdings, many aliens regard humans warily given their history of war and violence. Their level of expansion and the speed at which they've claimed territory have irritated other governments that border their empires, and the bluntness of human politicians has especially rubbed some governments the wrong way.

Humanity does have a strong ally on the galactic scene, however; the Rokhandans have a high opinion of the human race. Many Rokhandans call parts of human space their home, having immigrated to learn about this new species and what they had to offer. Much of Rokhandan culture has been shared with humans as well. Few races have approached the level of technology that the Rokhandans have managed to achieve, and in some small way they feel a sense of interest as to what humanity can achieve. While the two entities are not official allies, both species have a warm attitude and strong diplomatic relations.

That said, the general galactic stereotype of humanity was unfortunately reinforced in the wake of the Succession War. The catastrophic event caused by the deployment of the Federation's super-weapon was felt across most of known space, and carried serious repercussions not just for humanity, but everyone else as well. This, in turn, damaged the diplomatic ties that the Coalition had with other species. Stories of human ruthlessness and dishonorable wartime conduct have brought the truth of human brutality to galactic recognition, and has put humanity in a precarious position diplomatically. Despite the fact most of these crimes were perpetrated by the Federation, aliens typically do not make distinctions between the two entities. Humans are humans, and they carry a black mark for what they've done. 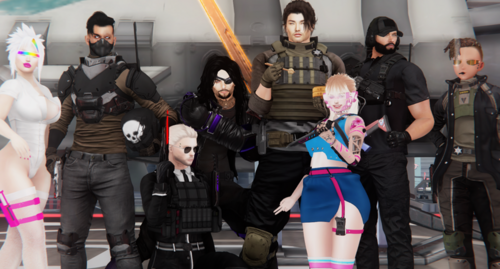 Human avatars should be using a human head, such as the default avatar, CATWA, the Aesthetic or Alex, to name a few examples. Skin colors should be of an earthen tone reflective of natural human skin. Do not use unnatural alien colors such as blue or green. Do not use Elven or pointed ears, unless you have Anahi as a secondary race. Markings on the skin are allowed (such as tattoos) given that they make sense for a human to have.