The Hexians are a rodent-like race hailing from a cruel and despotic world nearing the Voltker Zone. Their homeworld is ruled by an imperial dominion whose focus remains on genetic purity and absolute control, the idea of a person becoming often more valuable than the individual themselves. Despite this many of the race have escaped the grasp of the dominion, moving off to the stars to follow their own desires and form communities that have diverged far from the origins of the race.

Described as a sentient, insectivorous species: Hexians rely entirely on hemocyanin for their blood. Vaeus’ arctic temperatures and a puzzling absence of iron in it’s crust lead to a united species of cold loving rodentia. A Hexian of any phenotype will quickly expire in warmer climates, most notably through asphyxiation, as their blood will not properly carry oxygen without the right temperatures. Furthermore, their blood pressure is often a magnitude higher than human blood pressures. Punctures, gunshots, and stabs can be catastrophic injuries.

Their teeth are composed of interlocking, razor sharp fangs that extend to the back of their mouth. And often ‘speak through their teeth’. A Hexian smile is considered a nicety for human conventions, but a lingering smile is often a threat, akin to a sneer.

Vaeus Primae: If there was ever a ‘Base Hexian’ this would be them. They are slender, often being compared to Earth’s Rodentia or Opossum species. They average around 4 feet in height (Females tending to be taller) and are often referred to as “The Royal Bloodline”.

Vaeus Fortellus: Imposing, large, broad shouldered. This strain of Hexian stands around six to seven feet tall. Theorized by Fringe Hexian Biologists that the Fortellus strain was built imposing after some of the larger precursors mingled with Vaeus Primae. While some nobility consider this strain lowley and impure, Geneticists trace this strain to the original production vats. These days, the Fortellus Strain holds no differences in social standing as the other two strains.

Vaeus Navitas: Lithe, Thin, and Winged, The Navitas Strain is often compared to earth’s Chiroptera species. While their wings are often either attached at their arms or branch from their backs, somewhat vestigial, their light weight and curious nature make them natural explorers, scientists, and some even adapt their wings to swimming and deep sea exploration.

Hexians carry a bit of a polarizing weight to them. Everyone who has even scratched local history will have known the Hexian Dominion is very capable of the most despicable of crimes against their own species. Their military officers are cold, and sometimes cruel. Their Empire concentrates power to those who serve the military and belittle those who prefer to live a simple life.

The General population are sometimes scared of a lone Hexian, But those who know one personally will also know the common Citizen is not the tyrant-wannabe the propaganda would tell you.

Hexians are loyal, viscous, and cunning. They are would-be romantics and staunch believers in causes they are invested in. They make true allies when the rest have fled.

Their Federation Allies hold their promises, treat their diplomatic meetings with equal measure respect and suspicion, like keeping an armed bomb in a vault. 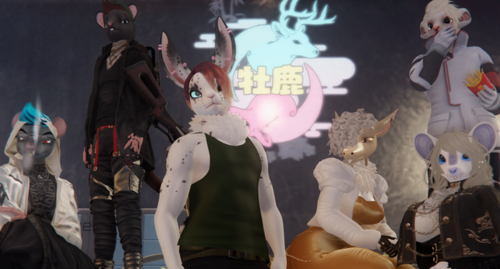 Hexians should appear rodent, rabbit or bat-like in appearance, generally mammalian, and covered in fur. They should also generally have pronounced ears or teeth representative of their species. Example avatars include the Happy Paws Rabbit, DSD Mouse, or Sugarcult Bat but may include any avatar that sufficiently represents one of these animals. Fur colors should be natural in tone with normal colorations including white, brown, black, or grey. However nonstandard colors can also be found, albeit they would be considered unusual.