The story of The Rabbit is one shrouded in mystery, and only a few actual facts are confirmed. It still stands as the oldest establishment in The Colony, out dating the bank, City Hall, The Hospital and even the Star Port. As with most towns, people need a place to drink after a hard days work, so natural a tavern springs up first with the rest of city around it. Rumor claims that the building itself is the last bit of the ship that brought the original colonists to settle the surface of Onia, but it has never been a proven fact. Though standing at the DJ booth and looking down it's easy to see where the bridge once sat.

The Rabbit has changed hands as many times as the pieces in a deck of cards. From the eccentric Jono, to the sultry Krystal and her band of mercs, It never stayed held for long. Currently in the clutches of Stag Industries and its corporate umbrella, The Rabbit has seen new growth from the skivvy strip joint to the current palace of carnal desires it is now. Politicians, Movie Stars, and far off kings travel to this backwater to experience the luxury of the club and it's staff.

Though it's not all fine drinks and lap dances. Reports from across the city have shown a symbol, a dangling Rabbit's paw dipped in gold linked to various crimes and violence across the colony. Leading Many to Speculate if mayhaps the staff are playing games of their own right under the nose of the WBA's marshals. It's long since been known that ANYTHING you want, The Rabbit could acquire for the right price and that may have been proven true. Those seeking access to the meetings behind closed doors know it best to not ask questions. Cute though the boss might be, more than once has a pistol been drawn on the unsuspecting 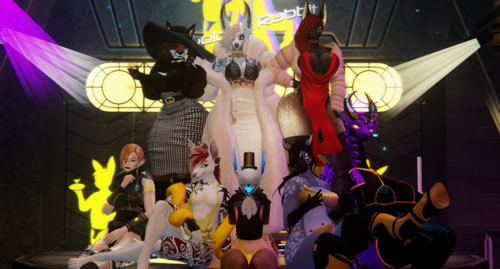 In charge of the day to day running of the club along with its employees and customers.

Sub managers that take care of admin work and HR.

Serving up drinks and making conversation the bartenders make sure everyone's throats are kept from being dry.

Those who work the poles. Attracting customers for the view.

Offering companionship and sexual services to the customers of the Rabbit, they also offer a callout service to other areas of the station for home visits or parties.

The current leader is the Head manager who delegates work to his assistant Managers who in turn take care of the strippers, bartenders and escorts and make sure they can do their work effectively.

(More information on prominent members and their roles to follow)