The Findsmen live on the edges of civilization, their focus is outward, toward the wilds and unexplored regions, reveling in finding fragments of a lost history and unknown technology. They document and attempt to understand the features of the world, the Flora, fauna, ruins from those who came before and their artifacts, as well as the local populations who lived on the planet before it was terraformed.

The goals of the Findsmen are two fold. Firstly, to recover knowledge lost to the past, putting it to use for the benefit of all, keeping such knowledge out of the hands of those who would abuse it, be it Federation, Coalition, or anything else in the wide galaxy. Secondly, to explore and study the wonders of Onina be it natural or historical.  They are scientists, archeologists, explorers, and outdoorsmen from all walks of life who have come together in the belief that they can make the world a better place

The location of their actual base of operations is a closely guarded secret, but the Findsmen can usually be found around the Onia Museum of History in Dusklight's Orbital District.. The group runs the museum as a legitimate business front, using it to gauge potential recruits who show an interest in both the Stygian and the natural history of Onia. Officially the Museum denies any ties to the group, but nearly everyone on the Colony knows that the two are tied together. The group used to reside in a valley outside the city, but trouble with N.O.M. forced them to abandon their previous sanctuary. Members can be found all over the colony, just as likely to be roaming the streets of Dusklight as being out in the Wilds or the Frontier. 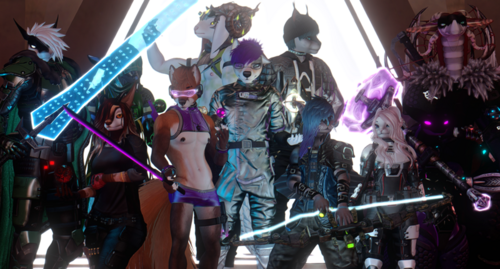 The Findsmen were founded on the belief that many of Onia’s woes can be traced back to a single source: Artifacts. Whether from the dangerous objects themselves, or powerful factions fighting over control of them, Onia is almost always caught in the middle. Thus the Findsmen were formed to deal with such problems, intent on containing the enigmatic technology of the Stygians, and protecting the people on the frontier world. They are fiercely against the weaponization of Artifacts, and if that is an Artifact’s only purpose, will seek to destroy it by whatever means. Artifacts with other benefits they seek to contain, and study, until they can be used for the benefit of the many rather than the few. Still if an Artifact is believed to have too much potential for misuse, they will seek to destroy it or lock it away. Unlike many other groups hunting for Artifacts, the Findsmen do not do so for their personal gain, or report to any larger governing body. Artifacts are a goal, not a means to an end. Despite their extreme measure in dealing with Artifacts, the Findsmen value the preservation of Stygian ruins found across Onia. They seek to understand the Precursor’s culture and history as much as their powerful technology. This often puts them at odds with treasure hunters, mercenary groups, and others who carelessly ransack the ruins in hopes of a valuable find.

True Artifacts are a rare find, and the group has taken up other causes over time. They have taken it on themselves to defend the frontier, and are particularly invested in studying and protecting what natural wildlife remains native to the planet post terraforming. Those who raid the ruins tend to not treat the colonists out in the Frontier too gently, and the Findsmen’s explorers and protectors are always willing to lend a hand when they can.