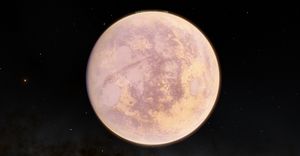 Fen is the largest planet in the Rokh System and is the capital planet of the Rokhandian Directorate.

The home to the rokhandan people and their place of evolution. It is a terrestrial planet with only a few landlocked seas and no real oceans, though rivers and lakes are common and important features. It’s most known for its wild and brutal climate with shifting climates and brutal winds, thanks to its high axial tilt and mildly eccentric orbit.With 12.5 hours to the day and 366 earth days to a year, it is common to use earth’s calendar for convenience, simply doubling the number of days. At the end of the year the ‘free day’ is held, a now-important rokhandan holiday. A bonus that is added to the calendar and serves as a rokhandan holiday.

Above it is a luminous ring. Fen tends to have brighter nights all year round, similar to a full moon due to these rings, and they occupy a permanent place in the spirit of the Directorate and Fen in general. Mining has completely ceased in the rings, moved farther away from the jewel of the Directorate. Exploitation of them was affecting the weather and threatened the species’ cultural heritage. Inside of the rings is the first of Fen’s moons, Idni. A It is not a remarkable body and has little more than scientific outposts on it. Though culturally it is particularly notable, highly luminous and light-reflecting, it is a bright glowing spot in the ring. However the second moon, Kuni, is far more notable.

Kuni is a terrestrial moon, it is for a moon, large, dense and could even be considered a planet if it was not in orbit of Fen. It is mostly ocean, with numerous islands, archipelagos and a single moderate landmass about the size of Brazil on it. Fully capable of supporting life, it has since had Fen flora and fauna transplanted onto it–lacking much in the way of life beyond algae and proto-organisms when found. Kuni is now considered property of no clan, and is the true capital of the Directorate, and where the vast majority of foreigners visit. It is the jewel of the nation.

Fen’s flora is diverse, with millions of species and subspecies of plants, they are usually green and leafy and not too dissimilar to earth foliage. However a peculiarity of Fen flora is the amount of rapidly growing durable algaes and ground-cover, often growing in cycles with the seasons. Grasses similarly tend to either grow in cycles of rapid death and life, following the unpredictable weather patterns, growing in the path of changing cycles. Larger plants such as trees tend to be broad and sturdy or tall and thin, mostly evergreen and survive longer and more extreme variations in climates, thicker forests often house micro-biomes unseen outside of their shelter.

As with any ecosphere, there are a large quantity of creatures, too large for a book, let alone here. But some notable species are as follows: Ghineru - A lanky four-legged creature non-obligate herbivore that shares both the role of a horse and a dog to the rokhandan people. They are on average about five and a half feet at their shoulder, with a longer neck. Most of their body is hairless except a tufted, wiry-haired tail and a long mane. Their faces are long, eyes are forward facing with round pupils and their snout has a tapir-like nose. They possess long and sharp canines and each foot is tipped in four hoofed, grip-capable toes. Though they are highly evolutionarily diverse, not unlike terran dogs, they can come in a variety of appearances and sizes. Today, they serve as traditional mounts and companions and are raised for dairy. They are incredibly important to rokhandan history and evolution, and the two species developed alongside each other in symbiosis. Hamav - A large wormlike invertebrate, about the size of a large dog in mass. They feed almost exclusively on the algae that grows in dead flora across Fen and have become the ubiquitous meat and egg producer for rokhandans, laying clusters of eggs with a calcified shell every week. Raza - A small bipedal reptilian pack-hunter and a common pest throughout Fen, these animals have unfortunately spread as invasive species to other worlds and are a notable predator of indiginous species. Their eggs were once very difficult to detect when parasitically laid in hamav. Permitting them to spread wide and far throughout Directorate space. Today efforts are being made to exterminate them from many planets and better detection measures have been implemented.

Fen is a well settled world, but the eccentric weather has forced certain unique trends on its surface. Most settlements are sprawling, rather than tall, low to the ground and tend to be well insulated for both heat and cold. But the most famous settlements on Fen are its Sky-cities. At ground level, they simply resemble a tall tower, with a large disc at the top, like a colossal tree. These towers are one part elevator, support structure, and massive wind generators. At the top are large, if compact disc-shaped cities. The cities themselves sit above the troposphere of the planet, where weather is gentle and calm. They have grown in size significantly from earlier versions of their design, and now utilize anti-gravity technology to ease designs. These are by far the densest settlements on the planet.

On Kuni, skytowers are still built, although the stabler weather has mostly removed their purpose. But notably the capital city of Ahni Sara. Ahni-Sara is a massive arcology and lies at the equator of the planet, a massive pyramid, it is where the ring visibly splits Fen in two. Ahni-Sara literally translates to ‘Star Home’ but translates best to ‘The Heavens’ in English. Kuni has been heavily terraformed. Though it had an atmosphere, it lacked much in the way of plant or animal life, and it took nearly a century to terraform it into a planet. Today, it is populated and marks a major cultural center of diverse communities. The majority of non-rokhandans live on Kuni, and the temporary academic community is significant.

Fen and Fen culture has a few holidays that are notable. As with most places, the solstices and equinoxes tend to be swarmed with local holidays, but a few traditions have emerged other than these.