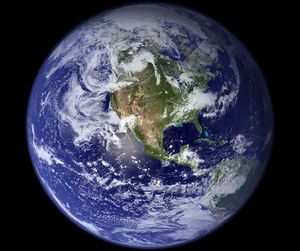 Earth is the third planet in the Solar System. It is the capital planet of the Galactic Coalition.

Earth is the officially recognized home-world of the human species. Colloquially referred to as Terra, Mother Earth, or Sol III, it has a long and storied history that stretches far beyond the relatively young human species that now claims dominance on its surface. Earth is the shining sapphire in the core worlds of the Coalition and stands as one of the most technologically advanced planets in the galaxy. For thousands of years, humanity slowly stripped its home-world of whatever natural resources it had, damaging both the environment and themselves in the process. Now, though, that humanity has expanded into the stars, great effort has gone into reseeding Terra with greenery and as such over time it has begun to recover. Now, Earth is a subject of pride for the human species. It stands more as an ideal or a symbol than the seat of the Coalition government, though they use this to their advantage. Even humans who live in the Federation have a strong connection with Earth as a concept, despite how far away it is from them.

With the founding of the Coalition, any idea of the concept of borders or individual countries were rendered obsolete. This meant that, if Earth was to survive as a unified entity, then steps would need to be taken to integrate societies that spent decades apart. Transcontinental transportation lines were built, allowing high-speed bullet trains and vast stretches of highways to leap across the cerulean waters of Earth's oceans. Cities bled into previously restricted borders, and local cultures and languages mixed and combined into something new. Up until the discovery of W-1. however, humanity was stranded in its local cluster and forced to search for resources in nearby planets. Colonies on Mars toiled away, and mining flotillas worked through the Solar system's asteroid belt helping to make up for the severe lack of resources left on Earth. In their greed, humanity had almost bled the planet dry.

This all changed when W-1 made faster than light travel cost-effective and easy. As the Coalition's colonies rapidly stretched beyond the Solar system, less pressure was placed on Earth and what resources it had left. In an effort to ensure the cultural and spiritual home of humanity remained pristine and did not devolve into a decrepit wasteland, the Coalition's government went through great lengths to take advantage of the terraforming technology they had access to. While the rest of the colonies worked to supply the Coalition with raw materials, laborers on Earth quietly went about reseeding the suffering planet. As such, many cities on Earth now have greenery built into them; vines creep up towering, glossy skyscrapers, lush parks are grown and tended to in city centers, and forests have begun to regrow freely with wood imported from off planet.

Human society on Earth is as varied and unique as it always has been. Though national borders melted away a long time ago, remnants of cultures remain. Architecture styles differ between regions, and many humans are still proud of their races and heritage even if nations are no longer a thing. Instead, as the Earth is divided into blocs for voting purposes, these blocs have their own cultures that resulted from a marriage of the new with the old. A significant portion of citizens who live on Earth are bureaucrats, military officials, scientists, or other highly educated workers. Almost all industry and agriculture are imported from off-world colonies, as the newly environmentally conscious policies regarding Earth have heavily regulated the construction of factories or farms. As a result, Earth is seen as a safe haven for intellectuals, and the fields of towering, sparkling white skyscrapers are sometimes broken up by large research facilities. These brilliant minds regularly contribute to the technological dominance of the human species, superseded only by the advanced Rokhandans.

Consequently, Earth is typically an expensive place to live. However, the Coalition is a highly liberal government. The average citizen of the Coalition is given a Universal Basic Income, or UBI, to help bolster their income from their livelihood. As a result, there is a place for physical occupations on the planet, though most people stuck pushing crates around or picking up litter do not get to live in the sprawling utopias you can find in most cities. Some areas of Earth have yet to undergo this terraforming, sitting as a reminder of the Old World and the self-destructive behavior that almost extinguished the human race. These slums aren't squalid to live in, but they do suffer from poorer air quality, remnants of pollution and degrading infrastructure. Ultimately, it was the goal of the Coalition to completely clean up these areas, but the unfortunate effects of the Succession War have halted all of these efforts, for now.