The reptilian Coathal are among the galaxy’s most uniquely resourceful people. Forged in fire by their pitiless desert homeworld of Charum, the natural strength and endurance of the Coathal is matched only by their stoicism. And yet above all, the Coathal regard democracy and civil discourse as their highest ideals.

Though their physical technology developed slowly, with space travel being only a recent advent, the Coathal have had a functioning civilization for longer than any other of the galactic powers, with their early bronze age having come about nearly 80,000 years ago. The result is a government composed of all their colonies, which practices direct democracy at every opportunity. Named for its star, the Vesreen Holdings is a government that regards individual voting rights as sacrosanct, and holds referenda on subjects as vast as war and commerce, to as granular as traffic bylaws.

Owing to this, the Coathal have a reputation for the slow, deliberate route in all things, and regard debate as a sacred right. This is a conclusion the Coathal have reached after countless millennia of political development and experimentation, dabbling in virtually every other system of governance. In many ways, the Coathal are “post-political”, their racial political processes long since honed by the advent of their Commweb. Each individual Coathal has a personal data Commlink they cherish, carry, and remain connected to during downtime and sacred family time alike.

Forged by a brutal climate and intense scarcity of resources, the Coathal are among the hardiest species in the galaxy, able to withstand the searing sands and eternal drought of their desert homeworld Charum, where they have evolved for millions of years. They possess hard scales, muscled bodies, have a number of biological adaptations such as subdermal chromatophores, sharp talons, and teeth to complement their robust physiology. Coathal are generally oviparous, and value the home as a place to first nurture an egg, and then raise a hatchling in.

There is no staggering physiological difference between Coathal males and females. Coathal can influence the birthed gender of their young through adjusting egg temperatures - hermaphroditism is a common result as well. Culturally, this makes gender a far weaker social concept - secondary sex characteristics and gender expression are often no good indicator of the reproductive organs a Coathal possesses.

The Coathal people were born of Charum's desert and its caves long ago. Sleeping under the stars allowed the Coathal much time to count and gaze upon them in wonder, always waving higher even in the face of their own hardship. Though undeveloped for millennia, their keen eyes and relish of clear night skies made them excellent astronomers, and so were well prepared for their journey across the stars.

The reptiles' technology progressed at a glacial pace in spite of communication, metallurgical, energy shield, and ceramic advancements due their content with their low-population, nomadic nature. Around 10,000 years ago a group of innovators banded together to found a truly planet-scale network they called the Commweb. Like many early networks, its original purpose was to argue with each other at distance, coordinate great hunts, and facilitate nightlife, personal quests for egotistical fulfillment, and parties.

As they struck out from Vesreen following the development of indigenous jump technology, the complex weather systems of other worlds absolutely baffled the post-contact Coathal, whose language accounted for no concepts of rain, snow, or clouds. Understandably, gaiaforming projects are a recent but intense area of research for the Coathal. Though it gives the lizards a comedic aloofness, those who leave the safe clutch of Verseen frequently indulge in idle cloudwatching as a pleasurable meditative activity.

The Coathal language is a guttural and highly fricative, consonant system, but makes heavy use of somatic hand gestures. This was an adaptation meant to carry emotional weight and meaning in a way that their unexpressive, leathery faces could not.

This is one of the few examples of a seamless blend of sign and verbal communication in a naturally derived language. It is common to see Coathal gesturing wildly, even to carry across the simplest of ideas. When they are unable to do so, emotional miscommunication is often a result.

While politics is an equal footing for the Coathal moreso than any other race, social strata still exist. There are rich and poor, and the former peddle influence while the latter, distracted by their working class struggles, may be coerced. Nonetheless, even elites roll up their sleeves during hard times and disaster, and pridefully sully their hands with what others would sneer at as menial labors, and even surrendering their resources for the greater good.

Politically, leadership is specifically a figurehead role; while those elected generally are enthusiastic, they choose to take very short term limits unless particularly suited for the task so as to return to the much more enjoyable forge, farm, or family activity as soon as possible.

The Coathal are very free with each other, long since socially adapted to nesting for body heat and shelter during violent sandstorms, taking great pride in their elaborate beauty displays, which start during whelping and continue well into and past adulthood as forms of play and expression. Especially after FTL contact, each individual of the species regards each other with full prize and ego in every circumstance outside of interpersonal drama, and naturally phalanx together to quickly close ranks around any threat.

Following suit, Coathal sexuality is often open and free. Though reserved with outsiders, rumour speaks of "Bloodwarmings"; desert soirees where psychoactive substances, music, and body-on-body contact can be enjoyed until the furnace of Vesreen dawn breaks over the land.

Coathal take pride in self adornment, sealing their scales with perfumes and pigments of every colour and palette, especially marking around their eyes for visibility and flash. Garb is usually light and flowing, with wasp-silks and mycoleathers popular, with fashioned carapaces and components from Charum's skilled metallurgists accenting dress.

Coathal martial combat was mostly confined to contests for prized cave territories, nesting grounds, and water/natural resources, with even minor territorial arguments quickly boiling into violent conflict. But even that is governed by the weather: the aftermath of these battles would be swift and unceremonious, with the defeated quickly captured and integrated into the victor’s tribe. After all, the sandstorm may come at any time, and there’s no sense hanging around. This constant Churn of violence ingrained itself deep in the fledgling reptillian's societal memory, giving them an unparalleled zeal for violence but also reconciliation. Combat martial arts are strong, making the Coathal astonishingly competent solo combatants. However, they are not as inclined toward the regimented and rules-based soldier’s life.

With expansion into outlying star systems possible, the Coathal required warriors adapted to the 29th century. Years of referendum voting distilled a single result: they would be genetically enhanced, with the DNA of the Poliesu people, and trained for hazardous environment combat. The result were the Coathal’s first elite combat unit, trained not in the traditional martial arts, but adapted to the needs of a galactic village. They fell under the Coalition command during the Secession War, but in peacetime have great difficulty adapting. Coathal gives them a respectful, but wide, berth.

The Coathal are known for their electromagnetic field technology. This came about from their early attempts to create repellant energy fields to deal with the constant sands around their nascent cities. Thus, well before the dawn of spaceflight, the Coathal had some of the most advanced active field technology in the galaxy - the small Coathal starfleet is notoriously sturdy as a result. For the same reason, their ranged and close-quarter electromagnetic weaponry is formidable, like special igneous glass tipped arrows and bullets, which shred bulkhead and beltline alike to ribbons.

A great deal of Coathal technology is bent toward the maintenance of their democracy, each Coathal carrying a personal Commlink Their systemwide Commweb is a dizzying, massive and very public server, where debate is carried it around the clock, according to strict rules of engagement. It is considered a great honour to be made a Coathal group chat administrator - a sacred charge.

Papyrus and milled pulp writing surfaces were ironically discovered post-FTL travel, the Coathal having long developed their own computational and electronic systems for communication. Long limited to slate carvings, chalk, and hides, bureaucracy was difficult, and so a cultural distaste for it developed in favor of dead reckoning and absolute, rapid resolution of conflicts.

Coathal smithing, driven by an ore-rich planet, has not abated with the advent of the space age. Ornate suits of Dune Armor, built as bulwark against a harsh world's natural forces during the Coathal's worst conflicts, are a common sight on the backs of Coathal warriors.

The Coathal have a reputation for stoicism, stubbornness, and a languid and slow pace in all things. Their deliberate nature frustrates faster-living races such as humans and Rokhandans, and their scavenger ways and strange hygiene practices cause them to be poorly understood, even by the relatively few people that have encountered them since their FTL first contact.

The federation consider the Coathal an enemy, having crossed them to side with the Coalition in the Secession War. Federation sympathizers will be eager to portray the Coathal as brutish, unintelligent scavengers from a dead planet.

Furthermore, the Vesreen Holdings government is notoriously difficult for powerful corporate lobbies to infiltrate, owing to its democratic nature and extremely stringent, rules-oriented political system. As a result, the Coathal have resisted numerous attempts at Corporate expansion, making themselves a target of the corporate propaganda machine, and portrayed as depraved scavengers and cannibal savages. The Onk Conglomerate’s similarly autocratic business practices have also been frustrated by this Coathal penchant for anti-corruption.

Neither of these factors have entirely dissuaded outside interests, of course - there is far too much valuable ore and spice in Vesreen space to entirely dismiss the Coathal. What’s more, citizens of the great galactic powers are at last taking notice of the Coathal’s fierce democracy, which is earning the envy and admiration of all those suffering under autocracies. 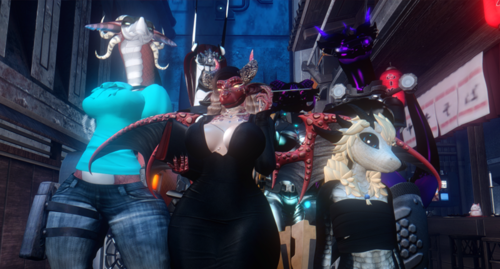 Coathal should use reptilian heads such as the DSD Dragon or ONA Snokra, or alternatively a non-reptilian head modded to be race accurate. Coathal vary in size and can be represented as larger anthro dragons, thin tall Snokras or the size of a normal avatar. They should have some kind of scaled body texture; any scale color is fine - and indeed the Coathal are known for painting and oiling their scales.