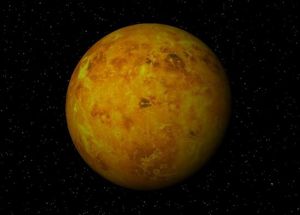 Charum is a desert world and is the capital planet of the Vesreen Holdings.

Charum is a massive, hot world that spins forth from its star with a low axial tilt, long days, and stellar transit. Its size casts the frequent shadow of eclipse on other bodies in the system. Poor in life, but rich in minerals thanks to perpetual volcanic activity, its thin nitrogen/oxygen atmopshere gives it a mesmerizing light blue glow. Its boundless rolling deserts are crevassed by painted gorges from glaciers long melted, and heaved by great tracts of mountains where its continental plates subduct into the seas of sand.

The surface of Charum is a brutally hot and arid sea of sand. Life exists around a precious few oases. Hard grasses, tubers, and cacti exist, playing host to powerful spices that are a cornerstone of Coathal trade. But of particular note are the notoriously dangerous fauna - frequently hardened, vicious, and venomous at the very least. Insectoids comprise the largest biomass of Charum, which the Coathal cultivate, farm, and even ride, taking wing on great beetles. While bug hunts on the surface and below are a pastime for the whole species, the Coathal undertake them only in the fairest weather. All surface species cower in the face of the planet's hurricanes, which often rise overnight from atmospheric temperature fluctuations, or lethal.

While the domed and electromagnetically shielded cities of Charum are several, and a semblance of modern life carries on into the space age, traditional lifestyles do still exist, with migrant tribes moving from city to city to trade spices and spare resources.

From mycellium to megapedes, grottoes to subterranean mangrove forest, the damp subterranean tunnels of Charum have it all, and over the centuries have become homestead to the Coathal species. Cooler temperatures facilitated the first ranches and animal husbandry, especially livestock like the tasty and rideable ploughbeast Chirans, Silkwasps with their harvestable and boilable cocoons, resplendent Gembeetles and Aurumaramachnids, and meatbugs of every shape, size, and leg count which only the Coathal seem to have a stomach for.

It is rumored that Charum's largely unmapped underground river systems are headwatered by an ocean of pure glacial runoff from its earlier epochs, but the Coathal do not appear forthcoming about this.

Carrying the Coathalese word for “debate” in its name, Xantiloc City is the oldest of the shieldcities, carved in part into a rocky mesa which provided early defense from the elements. With the advent of EM shielding, Xantiloc became the stronghold of Coathalese democracy and political development. Charum’s renaissance city, and a place where great debate and scholarship could be undertaken. Xantiloc survived a direct nuclear strike in the 22nd century: the last great Coathal world war, long since quashed by the advent of world government.

For the majority of Coathalan history, Charum was split between several nations with differing cultures, races, and laws. These independent countries warred every so often but for the most part kept to themselves. As the Coathal race entered the space age and their world powers began to launch satellites into orbit around Charum, they kicked off a space race that saw wealthy nations furiously attempt to one-up one another in their efforts to explore Vesreenian space. Colonies were founded and swathes of territory were claimed by these nations, leading to increased tensions and consternation amongst the world superpowers. Everything changed, however, when the Coathal came into contact with humanity and were forced to grapple with the idea they were not alone in the galaxy.

Now, the Coathal are still as inwardly focused as ever. They busy themselves with their own problems and do not take kindly to outside interference in their politics. Issues like their economy or their expansion are more hotly debated topics in the Vesreenian senate that alien affairs, and most Coathal prefer to be introspective than worry about other space empires. A portion of the populace do desire for the Coathal to cut their own path amongst the stars, but given that only a few generations have passed since the days of their fiercely independent nation states reigning supreme, plenty of regions on Charum still have wildly different opinions. For the Coathal, trying their best to unify their race in the face of several galactic empires is the best thing they can do right now.

The Coathal place a high value on democracy; they have a typical family unit and each Coathal is expected to do their civic duty of voting. To reinforce this idea that Coathal have a duty to take part in government, every Coathalan young adult is forced to either serve two years in military service or two years as a government intern so that they can learn how their democracy works; this ensures that the Vesreen Holdings has a steady supply of volunteers to keep the wheels of democracy turning, as a respectable majority of young Coathal simply remain in these positions to forge a life-long career, as it is the first job they are introduced to and the Vesreenian senate will help pay for school or other necessities so long as you remain in service.