The Anahi are a humanoid species that bears a striking resemblance to humanity. Originally a terrestrial species, they are now a nomadic race based on the thousands of ships of the Roving Sun fleet, on a centuries-old search for a new homeworld. An insular race, relatively little is known about their history, and they are considered an uncommon sight even on worlds near their fleet.

Anahi are bipeds remarkably similar to humans and have caused considerable debate among biologists on the origin of both races. They are easily identified by their dark, smoky skin color that tends towards purples, grays or blacks. Eye colors are equally dark with blues and violets the most common, with other colors such as green, brown or red more of a rarity. As a result of centuries of life in the low gravity of the Fleet, Anahi are typically tall and lithe, anywhere between six and eight feet tall.

While usually described as amazingly graceful, newly-emigrated Anahi often struggle in regular gravity, and some never fully acclimate and require external support. Those that fully adapt to gravity or are witnessed in their adopted-home environment are generally seen as elegant and refined, and human taste considers them supernaturally beautiful. While on the surface their beauty is apparent, Anahi use pheromones to help convey emotions or communicate among themselves. These pheromones can be detected by other races and sometimes can influence an individual's feelings or attraction to any particular Anahi.

With the twilight of their homeworld's surface and its dim caverns, the Anahi have excellent night vision, and the rare visitors to their ships have described them as unnervingly dark. The light that most races would call comfortable is blinding to an Anahi, and any seen out during the day or in a lit building with their eyes uncovered are guaranteed to be augmented. On Onia with its long twilight hours, this is less of an issue.

Interestingly, they are one of the relatively small number of sapient mammalian species with haemocyanin-based blood. Arterial Anahi blood is a vivid bright blue, while deoxygenated blood is clear.

Upon first contact the Anahi were first seen as a proud and mournful race, and their plight and the mystique of their people caught the imagination of artists across the Coalition. In the two centuries hence, galactic opinion has shifted, and many treat the Anahi with as much distrust as the Anahi have for aliens. Some simply cannot understand why the Fleet, in its extreme position, would refuse honest offers of help from polities such as the Coalition or the Directorate. Others believe that the Anahi's search for a new home is likely to end in a war that they will lose. The Anahi are as proud as ever- too proud, for many, who believe that arrogance will be the end of the species.

As such, the Anahi do not maintain diplomatic relations with most entities outside their few trading partners. Some governments like the Federation or the Grand Tide see the Anahi as a self-centered race, who believe themselves superior to other species. These assumptions are not entirely unfounded, but precious few have gotten the chance to actually communicate with the Roving Sun Fleet or its Pathfinder and are forced to relay messages using their mercantile flotilla. By the time they return to the Fleet and are eventually dispatched again more than a few years have passed, typically rendering any message obsolete. 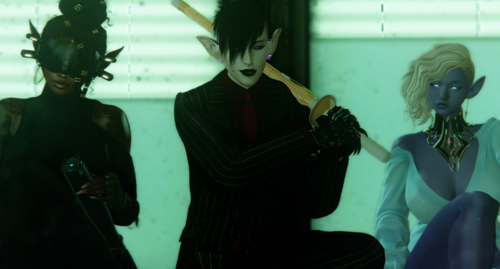 Anahi should have dark skin tones, either black, gray, dark blue, purple or dark brown. They should stand full-bodied and slightly taller than an average human. They have pointed ears and can have unnatural eye colors. Use of human heads that have the correct skin tones such as the Catwa or Utilizator heads is acceptable.