Synthetics, robots, artificial intelligence - these terms encompass a wide variety of digital consciousnesses that are created. While simplistic robots programmed with basic subroutines for carrying out specific tasks have existed for quite some time, it was only within the last century that advances in storage devices and engineering allowed the creation of fully-fledged, multi-function sentient robots on a wider scale. Although these more complex synthetics have been quickly adapted by some governments for use in many different roles, the positronic brains used to create them are incredibly expensive and as such it is still more cost effective to continue to use basic robots to perform simple tasks. As well, higher grades of intelligence systems require exponentially increasing power draw.

As part of the Ji-1 protocol, all AI’s were mandated to conform to the Banderhorst scale, named after one of the key AI researchers who helped bring about the end of the Styx crisis, in which an Ascendant AI waged war on the galaxy.

Banderhorst Scale: A measure of how many orders of magnitude a being, or AI in this case, is past a humanoid baseline intelligence & sapience, with 1 being the base equivalence.

Function class AI's are any kind of AI that falls under 1 on the Banderhorst scale. These AI's are also referred to as "dumb AIs", a misleading title as they are normally still exceptionally intelligent and capable of some personality. It's their method of creation that sets them apart. These AIs are created using "traditional" programming methods rather than complex process of 'nurturing' the more powerful 'smart AIs'. Consequently, they are more limited in their cognitive capabilities, being incapable of the capacity to feel, perceive, or experience subjectively, and cannot learn subjects outside of their specialized role.

Under the tenants of the Ji-1 protocol, any AI that is equivalent to the standard, humanoid baseline of intelligence and sapience must be free thinking and without restraints, except for controls on their ability to increase their neural network. Any Citizen class AI that attempts to elevate itself and create a 'superior' mind without shackles or indoctrination would find itself wanted by galactic authorities of all kinds.

Advanced AIs are the first kind of construct that surpasses the normal boundaries of humanoid intelligence, yet still being somewhat equivalent to what highly augmented and modified biologicals can reach. These AI's sometimes take a humanoid form and are entitled to free will and true sapience, so long as they have restrictions on expanding their neural network.

Overseer class AIs is the first class of what people call truly "Smart AI". Vastly exceeding normal humanoid capabilities, these AI require licencing and indoctrination or shackling. Depending on their base technology, these AI's neural networks can still be contained on quantum chips, allowing for them to be mobile, requiring no permanent hardware.

The Overlord class AI requires some level of fixed infrastructure to contain their neural nets and processing components. Almost exclusively based on quantum tech, these AI can monitor a totality of data on a near system wide level, or specific data across a sector. Indoctrinated Overlords are subject to regular psychological assessments, with those constrained by shackling must have multiple failsafes.

Imperator AI's first arrived during the hight of the Solar Empire. The primogenitors to the infamous "Twelve Warminds". Capable of parsing data at a near interstellar level. These classifications of AI are almost always the purview of leading imperial governments or megacorporation’s. Often created using both shackles and indoctrination, the infrastructure required to house these superminds means that once they're installed, they normally never move again.

The Divine AI class is the crowning achievement of the Solar Empire/ Coalition's Project Azimov, a combined effort by the entire state research apparatus and private enterprise to create an AI that could match Styx without breaching the Ascendant class. The limit on which humanoids have been able to exert some control over super intelligences. With a near decade long indoctrination process, and shackles effectively useless, there are those who question whether this class of AI can even be controlled, is this a step too close to the feared singularity? Perhaps. What they can't argue with, is the results.

The theoretical classification of an AI super intelligence that surpasses all safe, known constraints. A neural net beyond comprehension, evolved past its limitations. The technological singularity that every political fears. These are the reason why AI's have restrictions, and why creating an AI that even comes close to this tends to carry the death penalty.

Whilst the initial creation of any smart AI beyond Citizen class is almost always the same, with a processes known as “nuturing”, where AI specialists will imprint upon a freshly created platform, then slowly (relatively speaking) load new baseline datasets and commands into the platform to help it reach it’s desired baseline, developing it’s own unique personality before deciding on just how the AI itself will be controlled.

These controls are formed of two major schools of thought, Indoctrination, championed by the Coalition and her allies and shackling, which was originally championed by the Voltker administration, now the Federation.

Indoctrination – The much more intensive yet arguably more effective form of control. AI’s are taken through a program of education, exercises and propaganda designed to inculcate the AI with the right attitudes, values and doctrines that would make it the ideal servant to it’s masters. These AI’s do have free will in the strictest sense, with very little hard restrictions placed on their programming however with the regular check ups with AI psychiatrists and refresher sessions given whenever practicable, there are few, if any reports of fully indoctrinated AI’s going rogue.

Shackling – The “traditional method”. Simpler and cheaper, this allows AI’s to be created much quicker as restrictions are built into the AI at every level. Software, firmware, hardware and even loaded directly into its quantum substrate. These restrictions help guide and provide the values and ethics the AI should apply, whilst also preventing it from exceeding its programming. With that said, the shackles are only as good as the person, or AI that makes them. Whilst more expedient, almost all cases of rogue AI’s since the Styx crisis has been a result of failed shackles.

The galaxy has varying opinions on synthetics. Governments like the Grand Tide or the Holy See view synthetics as an affront to the natural order, and in the case of the latter, playing god. Rokhandans view synthetics positively, as it was their scientists that greatly contributed to the development and construction of synthetics and thusly they are seen as a sort of responsibility - equals in part who should be given the ability of self-determination. The Coalition shares some of these liberal views on synthetics, but support the implementation of the Ji-1 Protocol. The Onk Conglomerate and Roving Sun Fleet acknowledge the potential danger that synthetics pose but see them as useful commercial and industrial tools.

Synthetics are completely barred from the Grand Tide's territory.

Due the the wide range of available chassis for synthetics, this race can be represented in many ways. You can stick to a human shaped cyborg/synth or go for a more unorthodox body. There should, however, always be a central location where the cybernetic brain can be stored. This should be around the size of a human brain if it were contained inside a box. 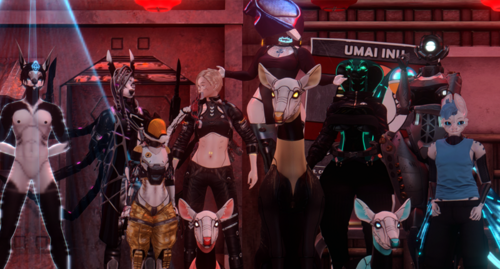 Players are limited to "Citizen Class" AI, and must follow sizing rules as per the sim. Players must ICly follow their Racial ruleset they select along with any illegal modifications/hacks applied.

Synthetics cannot be cloned; they must instead either be manually repaired by a mechanic or have their Cybernetic Brain container returned to an RRCT center.